The Gifted Program begins each school year with a planning phase.    Competitions typically beginning in October and last throughout the school year.    The competitions fall into these categories: 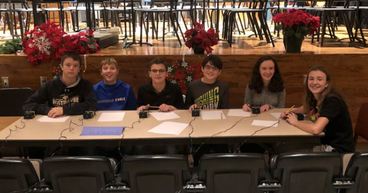 Each round consists of challenging questions ranging from math and science to grammar and movie knowledge. Belle Vernon placed 3rd in the competition.
Great Debate
Gifted students, Jacob Wessel and Alex Nash, competed for the first time at the Great Debate competition at Greater Latrobe High School on Monday, November 19th.

Students were given a controversial topic and were expected to conduct research, collect statistics and evidence, and present their debate to the opposing team and audience. Belle Vernon’s topic was, “NCAA student athletes ought to be recognized as employees under the Fair Labor Standards Act.”

The competition began with a coin toss.   Belle Vernon won so Jacob and Alex chose to be on the “pro” side of the argument. Greater Latrobe would then start the debate.

The debate lasted approximately 30 minutes. Belle Vernon argued that collegiate athletes should be recognized as employees while competing in their sport because they do not have time for normal employment outside of school, practices, and games.    Greater Latrobe expressed that collegiate athletes receive too many funds and support varying from endorsements to scholarships.

The final score was Greater Latrobe: 52 and Belle Vernon: 46   Both teams did an awesome job!!
​Our students toured the Roundhouse building on the site. A roundhouse is a locomotive maintenance shed built around a turntable. Students are to come up with an architectural plan of how they would re-purpose the roundhouse to benefit the needs of the surrounding community and to attract people from outside the community. After the students have a final plan, they are to build a small model of the Roundhouse featuring their idea of a remodel.

The Architecture Design Competition is in March 2019.
​
Visit  the Remember   link  for a list of some of the student activities and  photo  galleries from previous years.
Powered by